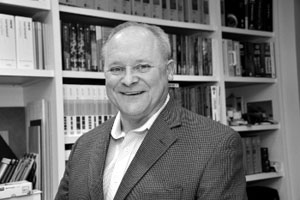 Bruce George, President and CEO of Charles Vincent George Architects (CVG) has announced the addition of Mark D. Nosky, former Principal of Stewart-Nosky Architects, Ltd. as Senior Project Manager for the Naperville-based firm. Nosky will greatly expand the commercial range of CVG with his 35 years of experience in retail and office design.

"We are excited to put two powerhouse architects together under one roof," says George. "I have had tremendous respect for Mark as a competitor over the years. He has an impressive portfolio and tremendous expertise in the retail and office design arena."

Nosky was attracted to CVG’s long history in Chicagoland; the firm’s reputation for having high design standards; and its portfolio of work on landmark projects. In addition to being honored by the American Institute of Architects (AIA) Northeast Illinois Chapter with an Excellence in Design award for Interior Architecture of the firm’s own offices, CVG’s notable projects include the Downtown Naperville Post Office conversion for Naperville Bank & Trust; the Naperville Sesquicentennial Riverwalk; Moser Tower Carillon; and the White Eagle Golf Club. “Having the resources of this larger firm will allow me to concentrate on the quality of design the firm is known for, while having a much more robust staff to serve my clients,” he says.

Nosky holds a BS in Architecture from The Ohio State University and a Master of Architecture from Washington University in St. Louis. After beginning his career in St. Louis, he relocated to New York City, where he worked for Philip Johnson/John Burgee and Kohn Pedersen Fox (in both New York and London), focusing on high-rise office buildings including Goldman Sachs’ International headquarters and upscale retail projects including Barney’s in Midtown Manhattan. In 1993, Nosky moved to Chicago to form Stewart-Nosky, an architectural firm specializing in a broad range of commercial, mixed-use and office projects.

“With the addition of Mark Nosky, CVG is poised to offer deeper capabilities in the retail and commercial sectors, adding to an already growing internal team dedicated to these markets,” says George.

Charles Vincent George Architects have been based in Naperville, IL for over 56 years and is a recognized leader in both the commercial and residential design arenas in the greater Chicago area and throughout the country. Founded by Chuck George in Naperville, Illinois in 1962, and now headed by President and CEO Bruce George, the firm provides professional services in architecture, interior design and land planning focusing on the Recreational, Financial, Retail, Automobile and High-End Custom Residential Sectors. CVG projects have received both local and national acclaim and in past years, has been named the Outstanding Firm of the Year by the Northern Illinois Chapter of the American Institute of Architects (AIA).